With 14 new signings this summer, Chris Hughton has seven different midfielders to choose from. Using Wyscout data, Liam Henshaw reviews and analyses Nottingham Forest’s midfield options to see who we should be playing, and what the future looks like

Despite the calamitous end to last season, Forest finished in seventh, their best finish since the 2010/11 season. Yet we still signed 14 new players in the summer, five of which were midfielders. This is simply not sustainable. So, this presents us with a question: how do we find out who are the best? There are many different metrics to assess midfielders, it all depends on what role you want them to play. From attacking creativity where we want to look at expected assists (xA), to defensive duels, there are so many ways to evaluate a player.

On the ball ability

A midfielder needs to be able to get on the ball, pass and create, and this is even more important in the modern game. In recent years, especially this season, there has been a lot of criticism of Forest’s midfielders for how creative and progressive they are — or not. The graph below perfectly displays this. There are only four players who are above average for their xA per 90* and smart passes per 90*. Of these, I think it’s fair to say that Joe Lolley and Luke Freeman have both been underperforming so far this season. 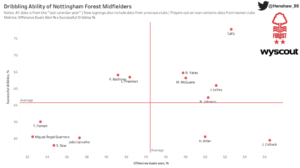 The other two are players who are out on loan — João Carvalho at UD Almería and Marcus McGuane at Oxford United. McGuane who is playing well for Oxford, is arguably enjoying more success playing on the left-wing. This could explain why he is coming up well on passing creativity as he’s playing in a higher, more advanced position. As for Carvalho, it’s clear to see how much the Forest faithful want him back at the club and it’s obvious why. He’s arguably one of the best number 10’s Forest have had in years and he’s been shipped out on loan. Whilst he does have flaws to his game, as we’ll discuss later in this article, he’s hands down one of the most creative midfielders and this is why Forest fans want to see him back in the Garibaldi. 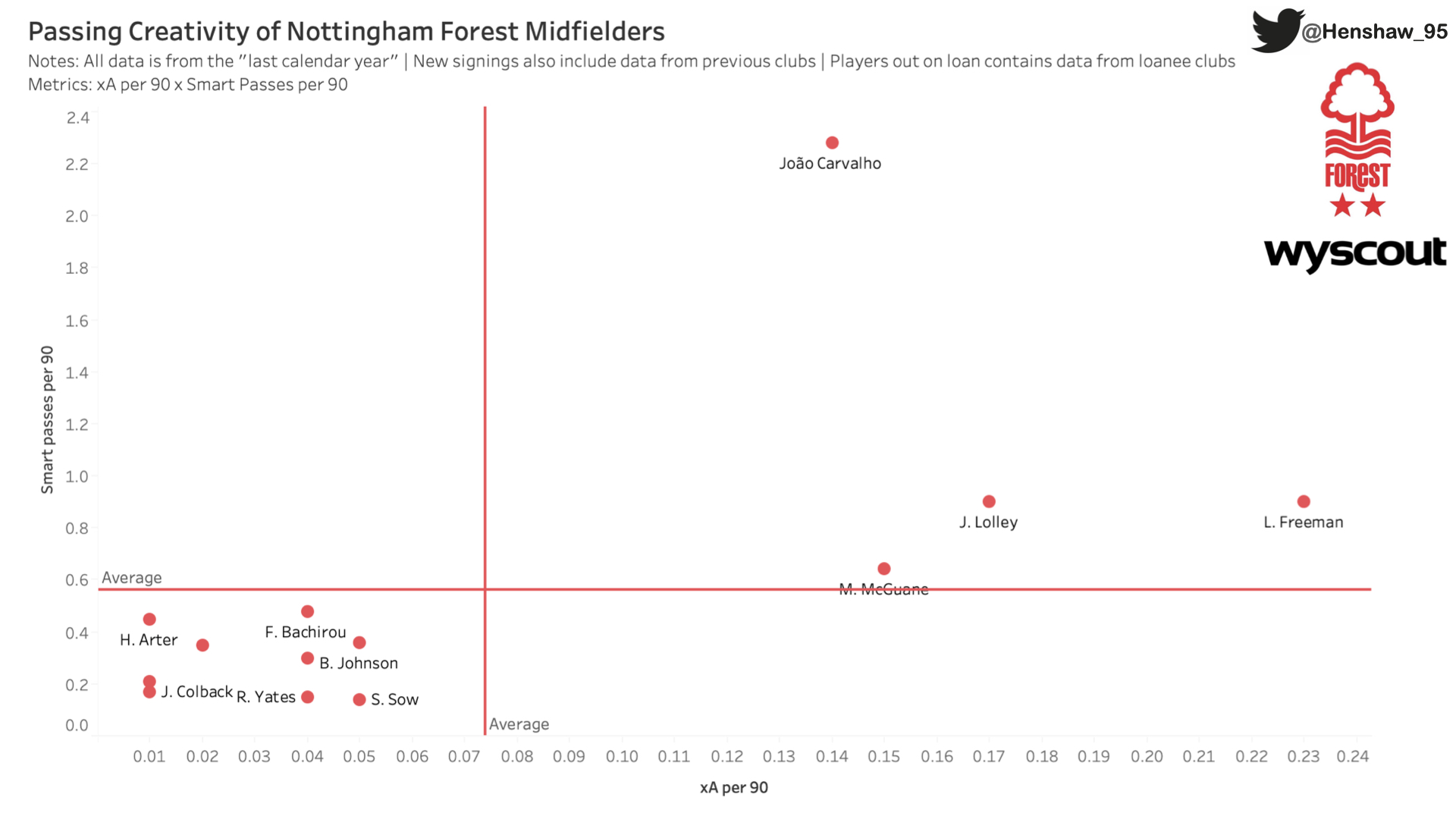 Earlier this month, Chris Hughton proposed Cafú as another option for an attacking midfielder and based on his dribbling ability (offensive duels won %* & successful dribbles %*), he’s got a point. Winning 53% of his offensive duels and having a dribbling success rate >77%, he could well be an option. This being said he does lack a creative quality with his passing. You’d expect attacking midfielders such as Johnson and Lolley to be up there on these data points as they often play in more advanced roles and in wide areas, which gives them more opportunities to dribble and engage in offensive duels. That’s why it’s surprising to see Ryan Yates come up well here. We’ve seen him get forward into more advanced areas and he’s been unlucky not to have scored yet this season. However, he does still lack the creativity on the ball, as can be seen above. Once again McGuane comes up well for on the ball data — could we see the former Barcelona man come back and have an impact on the team next season?

Finally, on the ball you need a player who has quality in possession and looks after the ball in midfield. One again Cafú comes out on top of the data here (accurate passes %* and accurate forward passes %*). Depicted in the graph below, the players who are brighter red are the players who make more forward passes. Fouad Bachirou and Harry Arter come up very similar and whilst we haven’t seen Bachirou so far, we also haven’t seen Arter on his best form yet either. We know the quality he possesses from his time at Bournemouth, and more recently loan spells at Cardiff and Fulham. He’s someone I would be expecting more from. McGuane also shows his many qualities again. 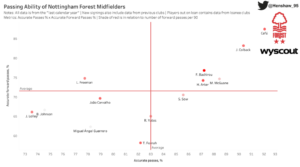 Midfielders are expected to chip in with goals and assists, and last season — apart from Joe Lolley who mainly played out wide — Tiago Silva and Ben Watson jointly had the most goal involvements from midfield with just seven, and of course they both moved on in the summer. We signed Freeman in the summer on loan from Sheffield United, who we thought would help add to our goal threat and although he’s struggling somewhat for form, he could definitely be that player. Below we take a look at expected goal contributions (xG contributions per 90*) and goal contributions per 90*, from this we can see Freeman is slightly underperforming. You’d expect those players who play higher up the pitch to be showing a good output here. Cafú and McGuane are showing up well on the data. You could say both are slightly overperforming, with both having more actual goal contributions than is expected of them. Conversely, Miguel Guerrero and Carvalho have both underperformed over the last year, more so Carvalho who has nearly 0.4 xG contributions per 90. 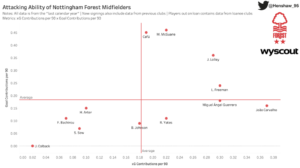 I’d like to talk about Yates here, who is the only ‘defensive-minded’ midfielder showing an above average output for xG contributions. I believe he’s added this to his game so far this season. He’s been getting himself into terrific positions, particularly in the box, and he’s been unlucky not to score. He’s totalled 1.84 xG so far this season, with 62.2% of this coming from headers. It should only be a matter of time before he gets on the scoresheet, and he’s a threat we need to continue to utilise from midfield this season. 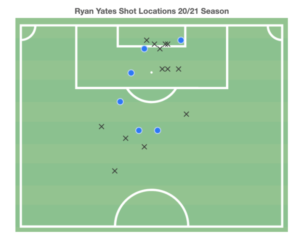 We all know the important defensive role midfielders play, especially when Forest mainly deploy a 4-2-3-1 system. This is in addition to having a whole host of defensive midfielders in the team. Below, we take a look at players’ defensive ability (defensive duels won %* x defensive duels per 90*). This further supports why Hughton thinks Cafú is better suited to a more advanced attacking role, with him having a fairly low defensive output. Of course this is where we would expect the likes of Samba Sow, Jack Colback and Arter to come into their own. Sow is showing very good for number for defensive duels, whilst Bachirou has less duels but a much greater success rate than anyone else.

A midfielder’s disrupting ability (PAdj interceptions* x PAdj sliding tackles*) is undoubtedly as important as their defensive ability. Below you can see Arter is in a league of his own in comparison to the other Forest midfielders. Once again Sow, Bachirou and Colback all show up well here. The main takeaway here is that all of these defensive-minded players are quite similar and could all play a similar role. 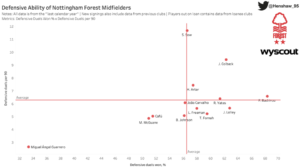 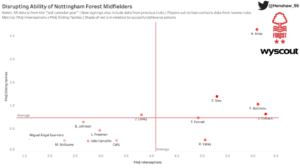 To summarise we’ve clearly got plenty of options for that defensive-minded role with Sow, Arter, Bachirou and Colback — but do we really need four of them? Yates is different; he’s added that goal threat and attacking ability to his game which separates him from the other midfielders in the team. Whilst Guerrero isn’t really a midfielder, he has been playing in a number 10 role at points this season. I think it’s telling that he’s not showed up particularly well across any of the metrics discussed in this article. A better option for that role in my opinion would be Cafú, which Hughton has discussed before but he hasn’t really got a run in the team. I would, however, like to see him improve his creative passing ability.

Finally, the man on everyone’s lips, Carvalho is someone who would add an attacking spark and threat to help create more chances in a team which is struggling for confidence in the final third. He does have flaws to his game, he struggles defensively and could be better at dribbling, but he’s a young talent who could offer a lot to this Forest team. Whilst the future for Carvalho at Forest is uncertain, it’s pleasing to see two youngsters in McGuane and Johnson showing up so well on the data. I believe both players have got big futures at the clubs and should be knocking on the door come the start of the 2021/22 season. Watch this space.

Nottingham Forest are back in the Premier League — but what’s going to happen?

Your chance to win the new Nottingham Forest away shirt

Is Jesse Lingard the missing piece in Steve Cooper’s jigsaw?

A successful transfer window for Nottingham Forest so far — but what next?

Nottingham Forest score three as they ease past Hertha Berlin