Nottingham Forest have finally received planning permission to go ahead with the redevelopment of the Peter Taylor Stand, which will see the capacity of the City Ground increase to 35,000 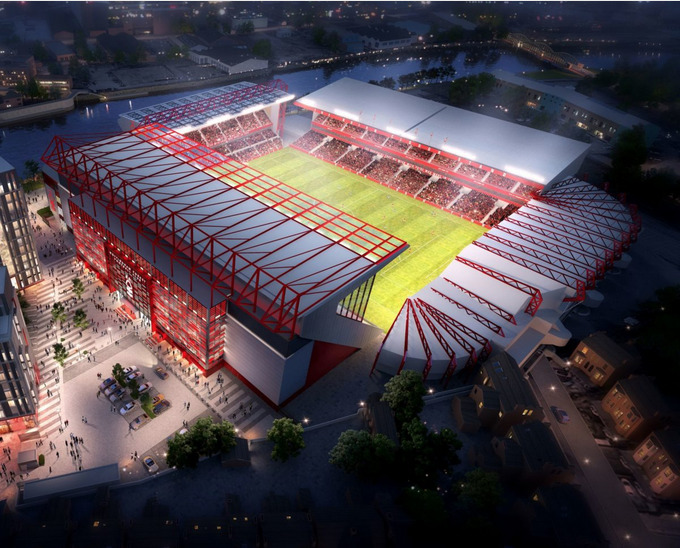 Rushcliffe Borough Council’s planning committee gave a green light to the project this afternoon following a meeting that lasted over two hours.

A club statement said: ‘Today’s decision represents a significant landmark in the journey to redevelop the historic City Ground site and represents the culmination of three years of dedicated work by the club and its advisers.

‘We believe that the development of the site is crucial to maintaining the club’s status in the Premier League and all of the benefits to the local community and economy which this status brings.

‘The development will also represent the physical manifestation of the desire of the Club’s owner Mr Marinakis to leave a historic legacy at the football club. The decision now opens the door to the club to have detailed discussions with its advisers and partners on how and when the development will be delivered.’

The original announcement, way back in February 2019, has finally come to fruition with work — originally scheduled to begin at the end of the 2019/20 season — now set to begin in earnest at the end of this season.

The proposal originally said there would be ‘improvements to the Trentside area, Brian Clough and Bridgford Stands. The new Peter Taylor Stand will see the introduction of world-class facilities including a museum, a new club shop, range of hospitality lounge options and restaurants and executive boxes.

Construction of the new Main Stand is expected to cost £94.4m — up from £80m in November 2019 — according to an updated economic impact analysis by ADE Regeneration. A proposed expansion of the Bridgford End, further down the line, would increase the City Ground capacity to 38,000.

After plans were initially submitted, a consultation period in 2019 saw 99.5% of respondents supporting the redevelopment. Plans were revised in 2020 and again in 2021 — further consultee and public responses saw a final round of revisions and responses this year which paved the way for agreement.

In its planning summary, Rushcliffe Borough Council said in conclusion:

‘The overall proposal is a strategically important development which would result in significantly improved sporting facilities for a variety of users in the immediate and wider locality. The development would have a wide ranging and positive economic, social, and environmental impact. Subject to the imposition of appropriate planning conditions, it would represent a sustainable form of development in accordance with local and national planning policy.

‘The proposal would also bring other positive impacts, which would have considerable and widespread public benefit. They include those that would follow from securing a more financially stable Club, the provision of new apartments, new employment opportunities, new investment and spending in the area, and the opportunity to secure and enhance the community work undertaken by the Nottingham Forest Community Trust. In combination your officers consider that these matters provide significant public benefits, which cumulatively outweigh the harm which would be generated by the development proposed.’

Numerous hurdles have had to be overcome, with three councils involved in the process — Rushcliffe Borough Council, Nottingham City Council and Nottinghamshire County Council. The Athletic detailed many of the issues in May, with the likes of the Nottingham Rowing Club and the Highway Authority now seemingly satisfied.

Development will not be able to begin until a replacement Britannia boathouse, an Asset of Community Value, ‘has been granted planning permission and has been constructed’.

Plans for redevelopment of the City Ground, or even a new stadium, have been discussed for years. And the lack of ability to host corporate events, conferences and increased hospitality has held back the club’s potential revenue streams while their rivals have seen turnover substantially increase.

Nottingham Forest are back in the Premier League — but what’s going to happen?

Your chance to win the new Nottingham Forest away shirt

Is Jesse Lingard the missing piece in Steve Cooper’s jigsaw?

A successful transfer window for Nottingham Forest so far — but what next?

Nottingham Forest score three as they ease past Hertha Berlin